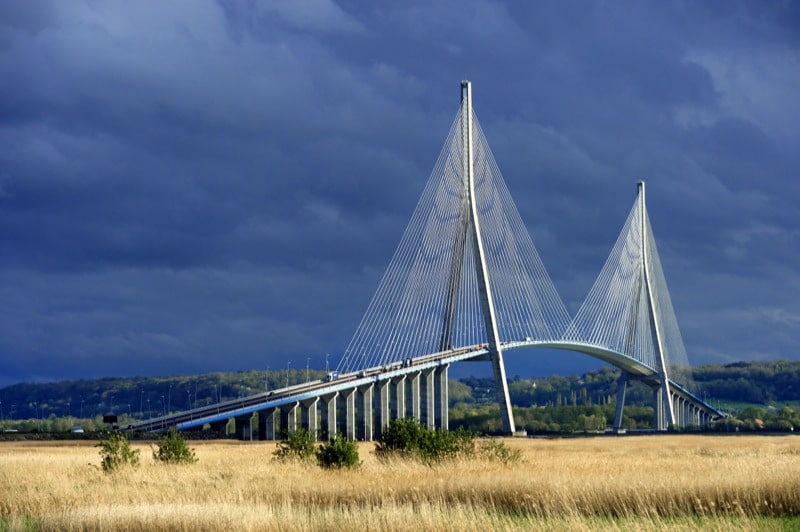 Your campsite Barre stake is conveniently located (between 10 minutes and 1 hour) to visit the famous bridges of Normandy all with a length of 100 meters: The Pont de Brotonne, the Tancarville bridge, viaduct Austreberthe, the Normandy bridge and the Pont Gustave Flaubert.

Haute Normandie welcoming the last meanders of the Seine, which came to rest in the mouth of the creek of Rouen, this requires many bridges span for. We talk about the main but there are very many mostly classified as historical monuments.

The bridge crosses the Seine between Tancarville Tancarville and the Marais-Venier, old loop of the Seine. The economic growth of the region and increasing the estuary Trays traffic encourages public authorities in 1931 to consider a book to serve as liaison between the two banks of the Seine. Acte well in 1935, its construction will begin in 1954 and end in 1959. It was at that time the longest in Europe with a span of 608m. The technical achievement is also due to the depth of the foundations of the pylons that descend up to 28 meters to ensure stability in the wetlands.

The Pont de Brotonne, spans the Seine up to Caudebec-en-Caux on a shore and Saint-Nicolas-de-Bliquetuit on the other. It was designed in 1977 to open up the Caux. At the time of its commissioning, the central span of 320 meters was then the longest in the world and its 125m height should reflect the passage of cargo ships. This magnificent steel and concrete cable-stayed bridge measuring 1278 m long and its towers reach 125 m.

The Normandy bridge meanwhile founded in 1995 and is also a real technological feat. It connects Honfleur to Havre with a length of 1241m. Its height is near 214m and apron must be high enough for the passage of large ships.

Its main span long held the world record. The Eiffel companies received the contract for the metal parts of the book as what the prestigious name continues to shine at the highest technological spheres.

These three beautiful bridges are sure to impress you with their excesses and the lesser works whose charm is always the rendezvous.

To visit these exceptional monuments, book your pitch or mobile home in Normandy.